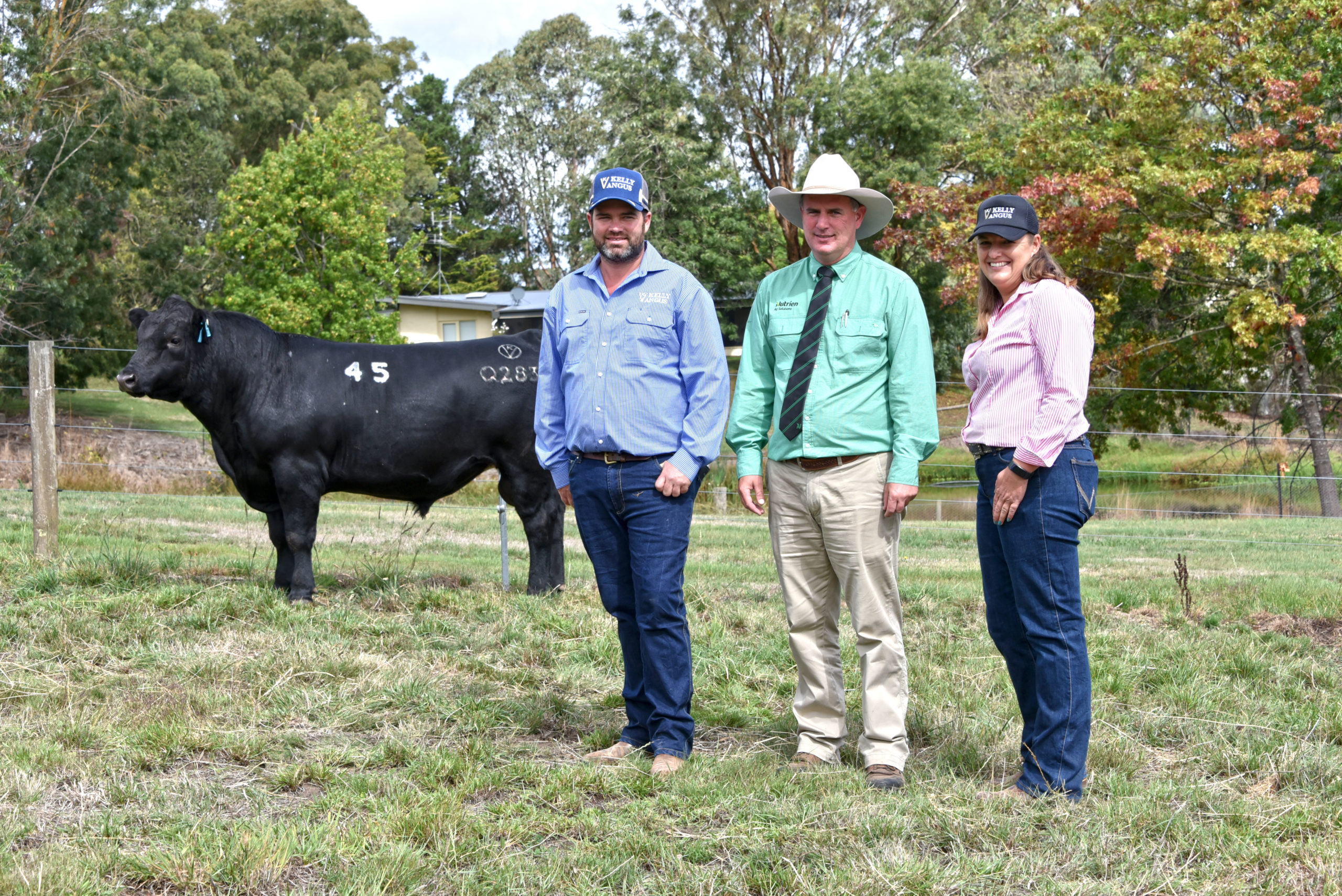 KELLY Angus bulls were in demand at the stud’s second annual sale on-property at Yea last Thursday with bidding remaining strong throughout the catalogue to achieve a sale top of $14,000 twice and a full clearance of the 68 bulls offered.

A big crowd of mostly local buyers helped lift the stud’s average up by $2118 from last year’s inaugural sale to achieve an average of $7243.

“We had a lot of local support with 56 registered bidders and 15 online and all bulls sold in Victoria, mostly within 200 kilometres of the farm with a number of bulls heading to Gippsland,” Mr Joyce said.

“It’s unbelievable to build such a strong base within our own region.

“Being a commercially-driven stud focused on grass fed and high carcase merit animals was a big draw card.”

Sired by Hazeldean M584, the bull sat in the top 1 per cent for three growth traits and top 1pc for all $indexes.

“His conformation was excellent, and he is docile,” Mr Hall said.

“His eye muscle area and intramuscular fat figures are up there with the best of many other bulls and this bull is by a sire we have not used before.”

Saving his run late in the catalogue, Ron Barnacle, Loch, snapped up equal top-priced bull, Lot 45, Kelly Angus Jackpot Q283, who is also sired by Hazeldean M584 and sat in the top 1pc for all $indexes.

“I buy on estimated breeding values and Ian Moreland had viewed the bull on my behalf prior to the sale and he was impressed with the bull’s structure.

“He is a muscly bull and that’s why I kept going because he was that good.”

Demand remained strong throughout the auction with three 18-month-old bulls selling for $12,000 each.

Leigh Drysdale, Yarck, held off the competition to take home one of those bulls, Lot 20, Kelly Angus Proactive Q269.

Mr Drysdale said Lot 20 had “very good figures for what we were looking for”.

“He is a very deep long bull with a lot of meat in him, and he wasn’t over in milk,” he said.

“He has direct calving ease, a moderate birth weight and lot of early growth which suits our Angus weaner market operation.”

Visiting from Bairnsdale, Derek Faithfull, Sharp Fullgrabe, was the volume buyer of the day and bought 10 bulls on behalf of a range of Gippsland-based clients.

“The amount of work the team put into the sale was phenomenal and I genuinely appreciate all of Pat and Cindy’s efforts,” Ms Standish said.

“The auction was outstanding, with many new faces, both locally and Gippsland, and clearly the beef industry is in a very good position.”

Nutrien stud stock agent Peter Godbolt said it was impressive how many bulls were sold locally.

“It was a very strong result considering it is only their second annual sale so to sell all the bulls for a full clearance was an outstanding result,” Mr Godbolt said.